I am Stephen “Schtee” Taylor, and this is the internet!

This is pretty much a repost/summary of a StackOverflow post, as it took me a long while to find this information; hopefully Google will do its magic and surface this for future generations.

I had a need to debug a Unity game on an Android device. The build running on the device was a Development build with debugging enabled etc etc. For reasons I had neither time nor inclination to investigate, Visual Studio was not discovering the device and it was not showing in the Attach Unity Debugger list, despite the device being on the same Wifi network, and physically attached by USB cable. I knew the IP address of the device, but not the port the debugger process was listening on, which apparently changes with each launch.

To summarise the StackOverflow post, you want to get hold of the ADB logcat output for your game. I did (something like):

…which will dump the logcat output to a file called out.txt . If you now search for monoOptions in the file you should see a line like:

If you add the device’s IP address with the port from above to the Visual Studio Attach Unity Debugger window, it should now connect, obey breakpoints and the like!

How and Why Is This Object Being Destroyed, Unity?!

I recently ran up against a problem in a Unity project I’m working on: a GameObject was being Destroyed, but I didn’t know why or from where. The codebase, naturally, has many calls to Destroy() and contains its own methods with that name, which made both Find References and text-based searches impractical. I just wanted a breakpoint in UnityEngine.Object.Destroy().

Spoilers: you may well know this method is a dead-end.

Unity will automatically call OnDestroy() on all components on a destroyed GameObject. I thought this might allow me to set a breakpoint, but OnDestroy() is deferred to the end of the frame, so the callstack doesn’t go back to the original Destroy() call. Next!

A discussion with a friend led to the idea of modifying the .NET IL in Unity’s DLLs to modify the contents of UnityEngine.Object.Destroy(). I Googled upon Simple Assembly Explorer, which allows you to view and modify the IL of compiled .NET binaries. Without any prior knowledge of .NET IL I was quickly able to insert a ldarg.0, to push this onto the stack as the argument for the next function call, and a call instruction, to call out to UnityEngine.Debug.LogWarning, which would give me a stack trace. I booted up my project in Unity and sure enough, every call to Destroy produced the log I hacked in there. Amazing! While this worked, it felt very fragile: any future update to Unity would stamp over this, and I didn’t fancy learning IL to build this out further.

I was aware of the concept of hooking/detours from lower level, C++/assembly code, and was interested whether something similar existed for .NET/C#/Mono/Unity. Google led me to Harmony on GitHub:

A library for patching, replacing and decorating .NET and Mono methods during runtime.

Not only does it support Unity, it’s built with Unity in mind- the example code is a mod for a Unity game. I was able to copy and paste the example code into a fresh project referencing the Harmony DLL, change the target class to UnityEngine.Object, the target method to Destroy and the target parameter to a UnityEngine.Object, then change the hooked method implementation to a log call. After a build, all I needed to do was drop my new DLL, along with the provided Harmony DLL, into the Unity project call the setup function to initialise the hooks and boom: the log was again produced on every Destroy. This has a bunch of benefits over the previous method, such as writing the patch in the language I was already using, not having to screw with binary file (so the patch’s code could happily live in source control), and being forwards compatible (unless Unity make any breaking API changes). In theory any C# Unity could be hooked in this fashion, which could be great for mocking functions or gaining a bit more control over what’s going on under the hood!

Just a quick update: I’ve open sourced my Sanitarium HD Patcher. The code and latest release can now be found on GitHub! Enjoy!

It is now available! Please find v0.1.0 here. This version will only work with executables with MD5 of 0A09F1956FCA274172B0BB90AA5F08A7. If people turn out to have other versions I’ll try to get hold of the exes and get them supported. Enjoy!

I guess that title would have worked better a month ago.

Anyhow. I’ve always been fascinated by software reverse engineering and general binary hackery, but had never really thought of a project to try it out on. Then I remembered the Fallout High Resolution Patch and the Infinity Engine Widescreen Mod, which apply cracking/patching techniques to allow old games designed at 1990s resolutions to run at glorious 1080p. I decided to do something similar.

I wanted a target for which no fan patch already existed. I was browsing GOG, and saw that the game Sanitarium had recently been added. I remembered that I already had a copy installed on my PC - perfect! Target acquired.

The first step was to figure out what resolution the game runs at out of the box. To do this, I took a screenshot of the game running windowed (command line param -w, if you’re interested), and highlighted the rectangle excluding the standard windows border stuff. I’m sure there are more scientific ways to tell the size of a window, but this worked for me. 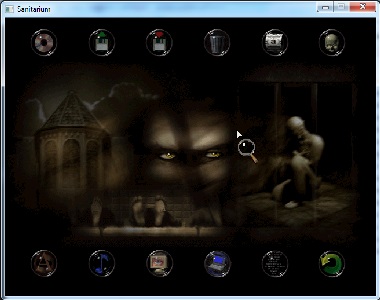 I deduced the game to be rendering at a 90s-classic 640x480. I opened up game in the trusty debugger, OllyDBG, and began investigating the heck out of it.

I searched for the number constant 480, set a breakpoint on each reference and ran the game. One of these was hit very early on in the initialization, and was proceded by a reference to 640 - strong candidate! (ignore the fact that the offsets are from patched - I’d already backed up the original executable)

I used Olly to patch the 640/480 values to 1280/720 respectively, and ran the game. The window was now 720p, with the main menu occupying the upper-left corner, but once in game it was rendering a much larger visible area. See below for comparison 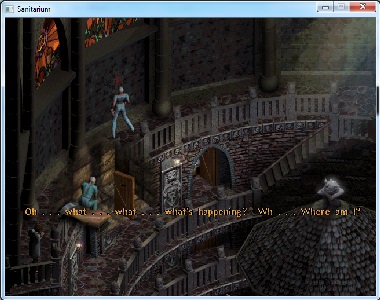 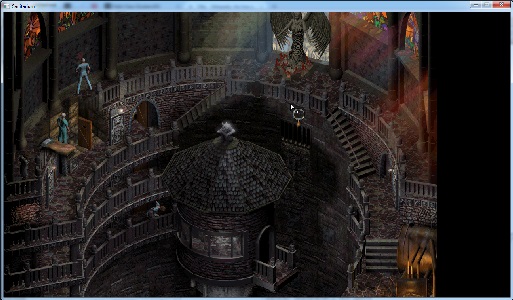 If you’re familiar with the game you’ll notice that all the game objects outside of the 640x480 camera the game is expecting aren’t drawn. I’ll address this later, but at this point I got ambitious(/distracted). The changes made in Olly can be saved out as a modified .exe, which can be used in the future. This would technically let me distribute the patched executable, allowing the wider internet to play the game at high-res. However, there are a couple of drawbacks:

A quick bit of googling showed me that in order to modify executable code on the fly in Windows you basically have to write a debugger. This sounded very intimidating. I continued my research and it turned out to be conceptually very simple. All that’s required is a C++ project to do the following:

The target’s executable code is memory mapped to an offset from a base address. For 32 bit Windows programs, this address is 0x00400000. I referred to the patches I made in Olly to get the address which needed to be modified. As can be seen in the screenshot of the debugger, we started with a PUSH 1E0, followed by a PUSH 280 (480 and 640 in hexadecimal). The compiled x86 machine code for PUSH [some 4 byte value] is 68 [some 4 byte value in little-endian] - 68 E001000 in our exaple. In this case, and most cases we’ll need to deal with, we can leave the PUSH (68) part untouched, and only change the operand (E001000). The program I wrote takes the desired resolution (x and y) as command line arguments and parses them as an unsigned 16 bit integer. We can then take a pointer to one of these values, cast it to a pointer to a byte, and treat it as a little-endian 2-byte array, like so:

The PUSH 1E0 happens at 0x0041A5FF. We can leave the first byte as 68 for PUSH, and just modify the 2 bytes at 0x0041A600/0x0041A601, to the 2 bytes of resYBytes. To do this we can use WriteProcessMemory, passing the offset we found with Olly as the lpBaseAddress param, the 2 byte array representing the dimension (e.g. resYBytes) as lpBuffer, and then the size to write as 2. That’s basically all there is to it. Once the patch for setting resolution width and height are applied, my program closes and lets the game carry on as normal.

As I mentioned earlier, even with the resolution patches applied there are still some objects inside the newly-embiggened viewport which are not being drawn. Jumping back into Olly, I continued searching for 640/480. This lead me to the area of code below: 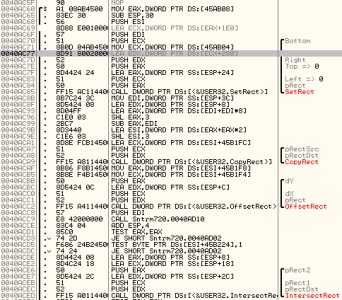 To ease both rendering and logic load, games often skip (or cull) objects which aren’t visible. I could see some calls to functions operating on Rects (IntersectRect/OffsetRect), and figured this could be the logic for culling offscreen objects, still using the hardcoded 640x480. Applying a couple more patches to bring these up to 720p I was presented with this: 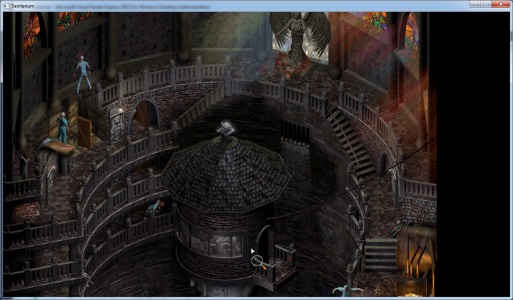 Note the extra dudes in the bottom right. Amazing! I then jumped over to my project and made the code a bit more generic, using a std::map<uint32_t, const uint8_t*> to store arrays of bytes to be patched in, indexed by their memory address. And that’s where I’m at. There is still one pretty glaring issue: 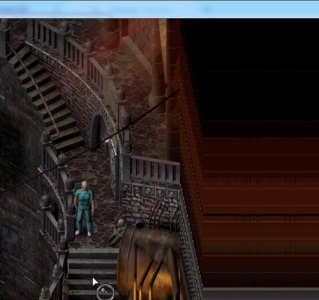 Previously the camera was restricted so it would never draw beyond the edge of the level. Now we’re drawing a bigger area around the player, empty space is visible. It looks like the surface the game draws to isn’t cleared every frame, leaving the remnants of the previous frame hanging around. I’ll need to figure out a way to clear it before the background is drawn to it, then we should be all set!

I also still need to add some validation of command line arguments, and I’ll make a follow up post with it (and hopefully the full source code) attached once it’s ready.